Brick is one of the oldest building materials, dating back to 7000 BC for sun-hardened varieties and 3500 BC for the first kiln-fired blocks. It’s also among the most versatile, used for modern “abstract menorah” shapes and stunning arches. Even the method of laying bricks—spreading mortar, positioning a brick, and smoothing out excess mortar with a trowel—has remained the same for millennia. 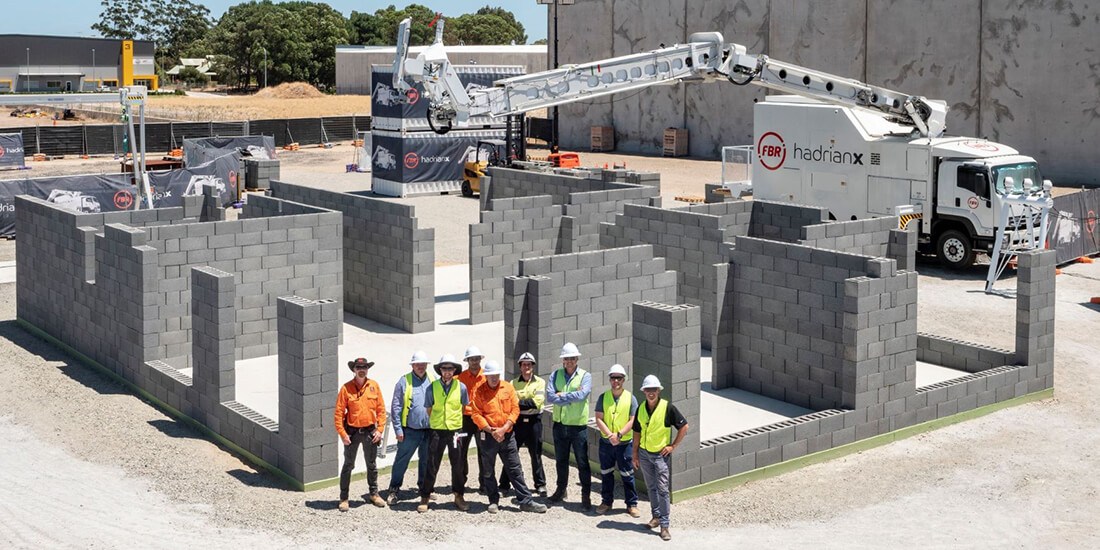 Now, one company aims to augment this thousand-year-old tradition through technology. Australian-based construction-technology firm FBR (formerly Fastbrick Robotics) has developed Hadrian X, a bricklaying robot (named after the wall-building Roman emperor) that can do its work without any human intervention 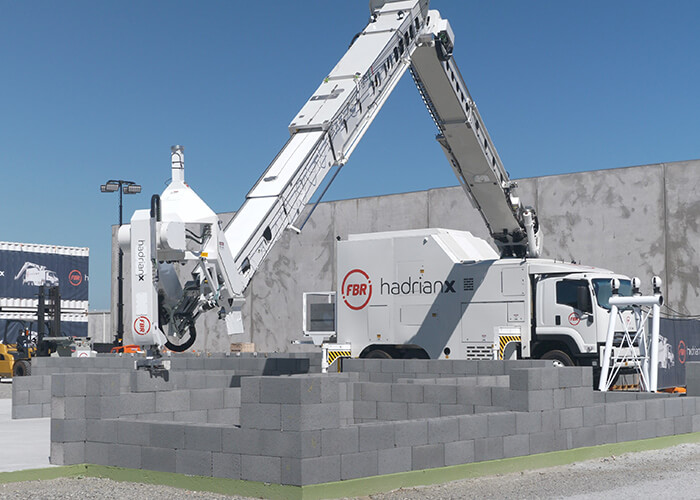 This technology could provide wide-reaching benefits, including addressing housing shortages around the world. “There aren’t enough people to build houses fast enough,” says Steve Pierz, chief innovation officer at FBR. “We need to automate the process through mass construction, and this is one of the ways it can be done.” Pierz also sees an opportunity to rebuild after natural disasters strike. “I envision fleets of these robots putting up housing structures quickly in disaster areas,” he says.

Hadrian X’s precision could also improve efficiency, resulting in houses that can be built faster and cost less than traditional methods. And Hadrian X promotes a lean-construction approach in which productivity increases and waste decreases. “We take a single source of data and from there, we’ll know the number of blocks and the amount of adhesive required given the lay pattern,” says Simon Amos, director of construction technologies at FBR. “So you’re fully informed up front what waste, if any, there will be.” 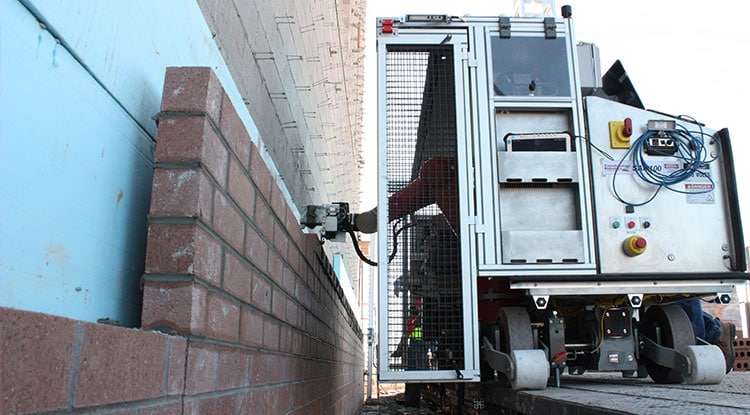 Hadrian X looks like a typical truck-mounted crane, but it’s assembled from complex components: a control system, a block-delivery system, and a dynamic stabilization system. Putting these systems together brings Hadrian X to life. Once blocks are loaded onto the machine, it identifies each one and decides where it goes. The machine can also cut blocks into quarters, halves, or three-quarters when needed and store them for later use. These blocks are then fed into a boom-transport system and conveyed to a layhead, which lays out the blocks based on logic and the pattern programmed into the machine.

The layhead is where the magic happens,” Pierz says. “So even with wind blowing and vibration shaking the entire boom, it’s holding that block, compensating hundreds of times a second to keep that block at the precise location.” 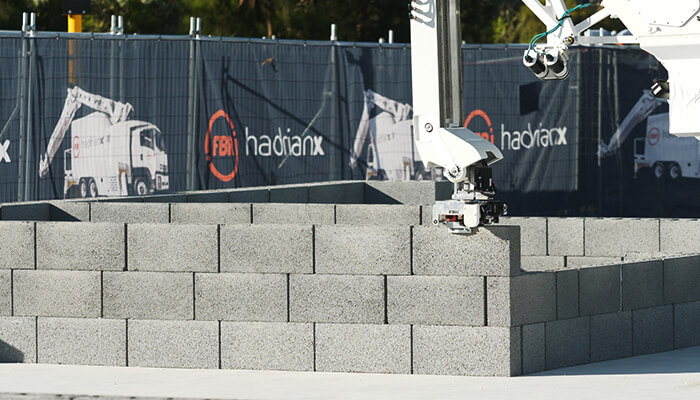 The Hadrian X robot has been more than a decade in the making. The initial idea for a dynamically stabilized robot was conceived in 1994, but it wasn’t until 2005 that FBR founder and Chief Technical Officer Mark Pivac created the first prototype. When the global financial crisis hit in 2008, production stalled for Hadrian X’s predecessor, Hadrian 105. The project resumed in 2014 in the midst of a stronger economy, a boom in construction, and a labor shortage for bricklayers and masons. By 2016, development began on the next iteration, Hadrian X.

The robot’s control system is the “brains” behind it. Using Cartesian coordinates and parametric design, FBR’s proprietary software transforms a wall structure modeled in CAD into brick metadata, with every brick and its corresponding coordinates known. The software then uses the metadata to populate the bricks into a particular nesting pattern and, with the help of an algorithm, determine how to lay out the bricks according to the pattern and other parameters such as the size of the robot’s layhead and how it grips the blocks.

For Hadrian X’s wall system, FBR designed its own blocks and block geometry. “The notion of a block is based on a human handling a brick and laying it at a certain rate,” Amos says. “We changed that to suit a robot.” Hadrian X’s blocks have been optimized to ensure wall thickness is consistent. They’re 12 times larger than a standard brick to maximize lay rate; Hadrian X is capable of laying one block every 45 to 55 seconds. FBR uses a special adhesive that bonds faster and holds stronger than traditional mortar.

For the actual operating mechanics of the machine, Pivac used his background in aeronautics, mechanical engineering, robotics, and mathematics to develop a patented Dynamic Stabilization Technology (DST). DST enables accurate positioning of blocks over large distances in a 3D space, counteracting the effects of wind, vibration, and other environmental factors to keep blocks at their precise location. This stability allows Hadrian X to be mounted onto other bases—including barges, boats, cranes, and tracks—and to be used for bricklaying in other sites. 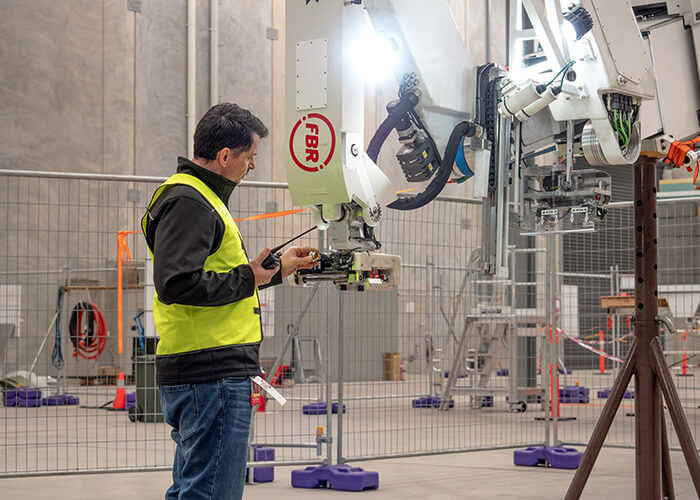 “The challenge is making sure all these systems come together—that they’re highly coordinated, there’s strong choreography between all the modules within the robot, and that we can clearly manage all the environmental issues that sit around a dirty, dangerous construction site,” Amos says.

To overcome these challenges, the components of Hadrian X were rigorously tested, with each testing phase bringing lessons and improvements. Hadrian X’s milestone build was done internally in November 2018, completing a 180-square-meter home within three days. The next step involved outdoor testing during the peak of Australia’s scorching summer in February 2019.

“We did an outside build to collect data and try to understand environmental influences as we brought our robot into high temperatures,” Amos says. “A lot of this was about really challenging the robot, putting it out into a fairly aggressive, hostile wind and temperature curve, and seeing what it did.” 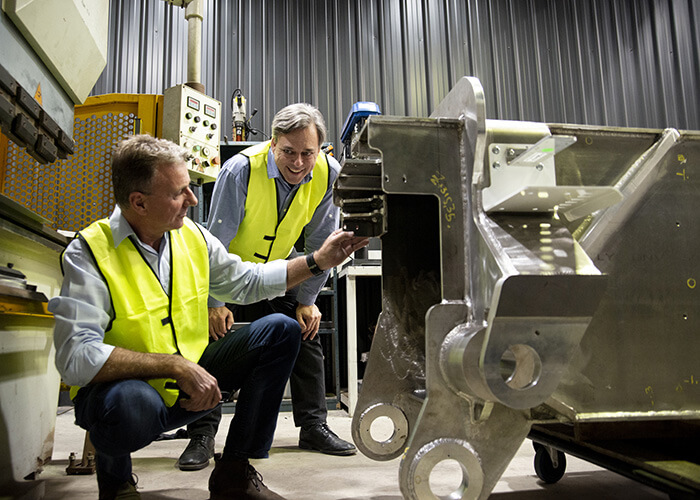 FBR is already preparing for the global future of Hadrian X. The company signed an agreement with GP Vivienda—the housing division of Grupo GP, one of Mexico’s largest construction companies—to explore pilot programs in the country. The firm also signed a memorandum of understanding with the Kingdom of Saudi Arabia to discuss a project building 50,000 new homes. Another partnership is in place with Wienerberger, an Austrian-based clay-block manufacturer, to create optimized clay blocks for Hadrian X and plan a pilot project in Europe.

Back home in Australia, FBR has partnered with Brickworks, a major supplier of building products, to deliver “Wall as a Service” across the country. Through Wall as a Service, Brickworks will supply special concrete masonry blocks for FBR’s bricklaying robot to build the walls, focusing on residential projects.

Pierz believes that Hadrian X has the potential to change the construction industry. “Disruption only comes when you look at your industry from a completely different angle,” he says. “You have to be willing to try and experiment with new technologies or you’ll be left behind.”

These Article is published is at https://www.autodesk.com/