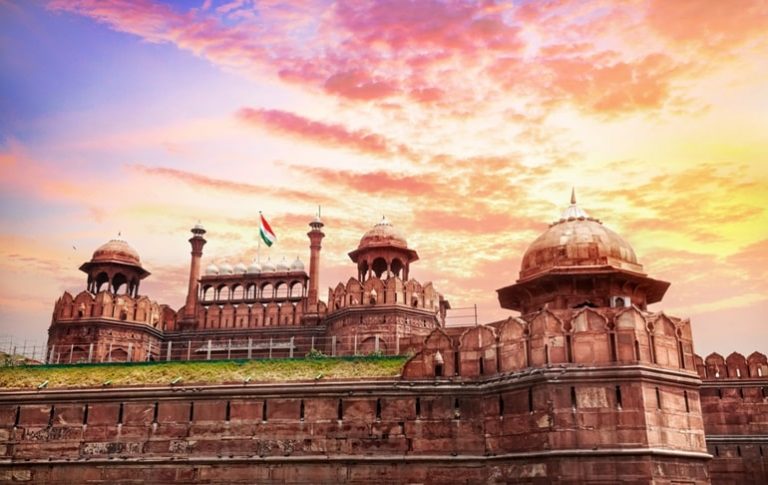 Qila –e –Mubarak, the blessed Fort, the real name of the largest Monument of Delhi. Built by Emperor Shah Jahan for his new capital –Shahjahanabad. It is often called as the Pinnacle of Mughal Expression of Art and Architecture. It stands by the great idiom –Rome was not built in a day and took 10 years to complete. The Fort was built near the Yamuna river, which served as a moat mainly. The architect appointed was Ustad Ahmad Lahori, the Architect of Taj Mahal. It’s been recognised as UNESCO World Heritage Site, since 2007. 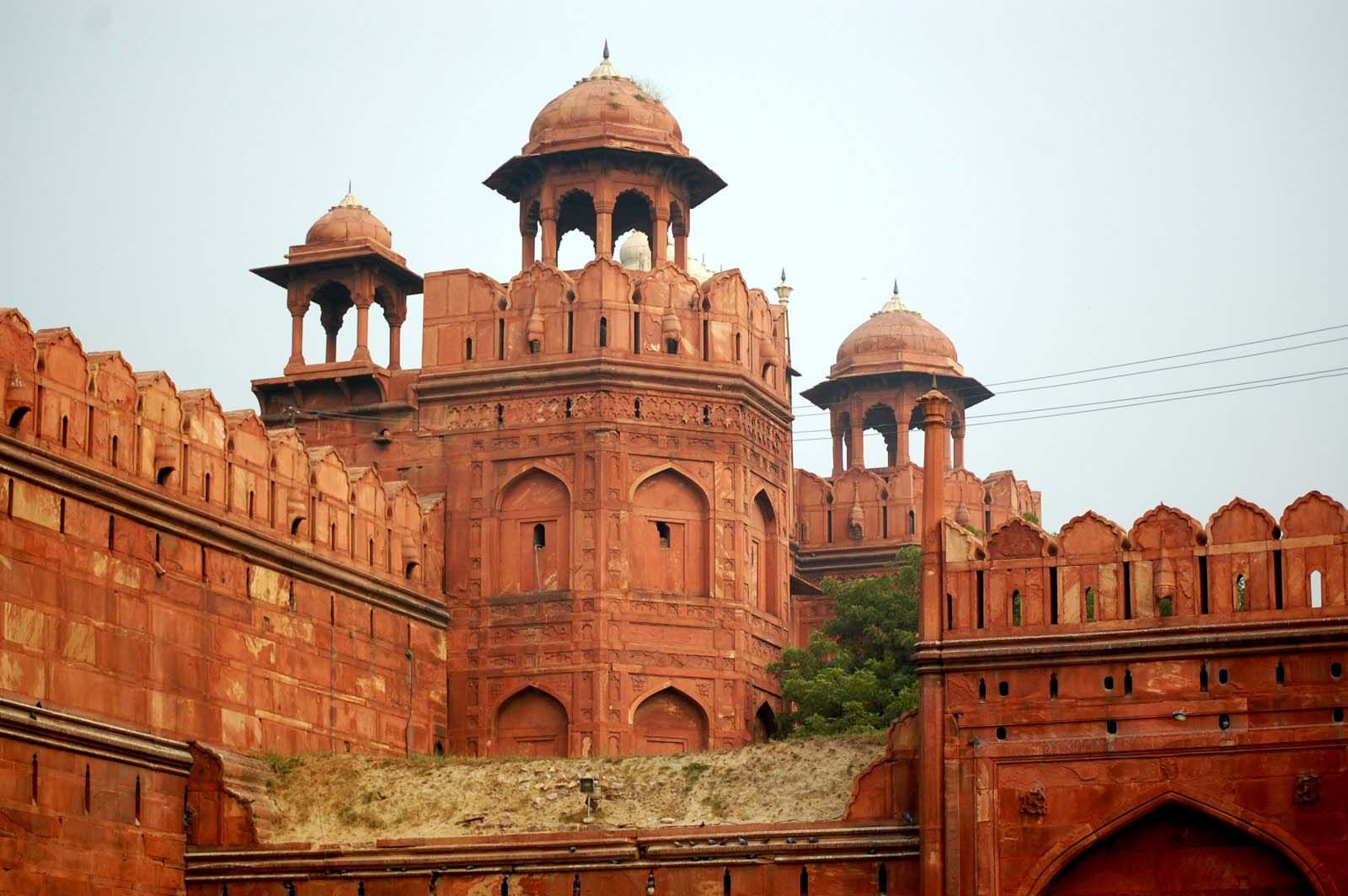 The Fort was ruled by, after Shah Jahan, from Mughals, Sikhs, Marathas to Britishers. It was plundered many times by Persian King Nadir Shah. He took various artworks, jewels, furniture (Peacock Throne), etc., from the palace. Britishers plundered it too after 1857 mutiny but called it a systematic one. All this led to a major change in the architecture of Red Fort. It was built in Shah Jahan’s two favourite colours–RED and WHITE.

However, after being stripped off of many of its jewels, art and ornamentation British painted the buildings the Kohinoor diamond was reportedly part of the furnishings. Red to minimise the maintenance of the enormous monument. India got independence from the Lahori Gate of Red Fort. Since 1947, every Independence Day, Prime Minister hoists the Indian Flag and delivers a speech. This has made it a Significant Identity of the city as well as of the nation.

The Fort was built in the ShahJahani Style–the amalgamation of Persian, European and Indian art, enriched in colour, form, art and expression. Being built in an octagonal shape with the North-South axis larger than the East-West axis. The monument also contains the Salimgarh Fort hence resulting in an asymmetrical boundary. However, Shah Jahan designed it as per the Quran’s description of Heaven. 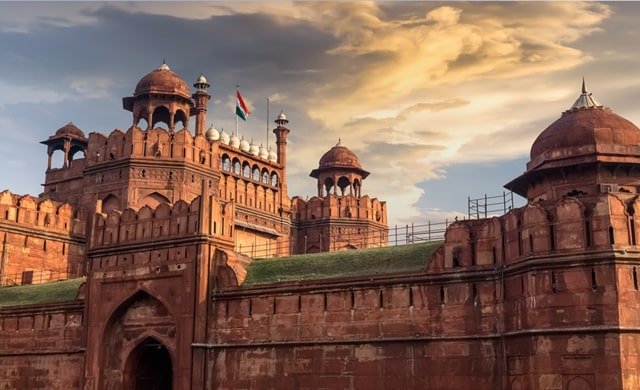 Spread across 103 hectares in the heart of Delhi –Chandni Chowk had various royal chambers connected with Nahr –i –Bihisht, the water stream of paradise. It was named after 1.5 miles of RED defensive Walls. The height of these walls ranges from 18 m on the river side and 33 metres on the city side. The gate for Emperor was called Khizrabad Gate. Other two gates are Delhi Gate, the south side, and Lahori Gate, named after its direction towards Lahore, opened for public. 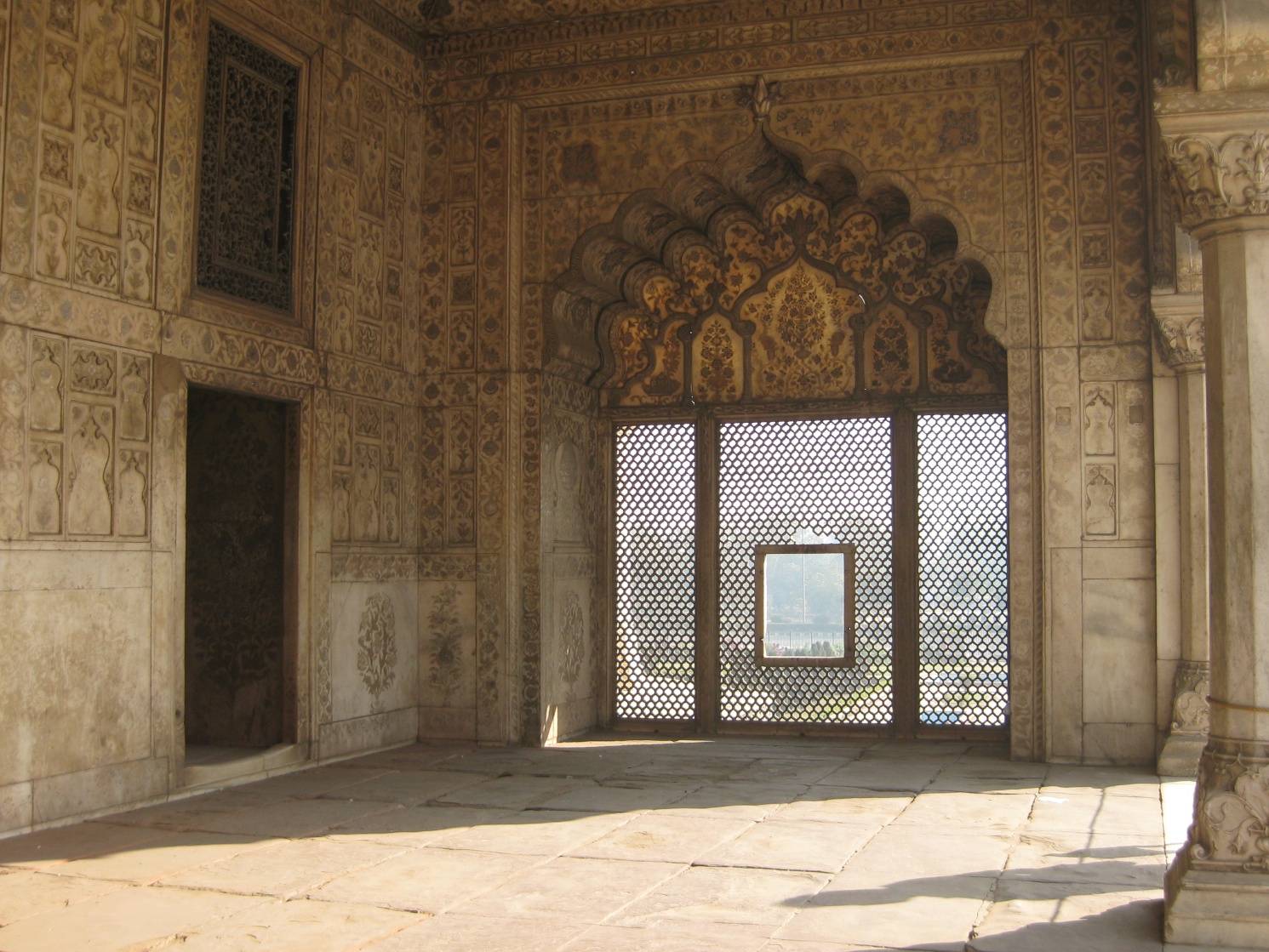 Chatta Chowk, the bazaar for the Royal Family, is right in front of the Lahori Gate. It had silk, ornaments, etc., on sale for the royal household. Its vaulted arcade ends in the centre of Naubat Khana. Then comes the public audience hall –Diwan –e –Aam. Originally it had a silver ceiling but was later taken down for the defence by Marathas. Its engrailed arches, columns and raised marble balcony for the Emperor to talk to its audience and to put the fine artisanship and expression to its best display. The north side of the hall has Jalau Khana and Diwan –i –Khas, made of marble and engrailed with precious stone for the private audience hall. Like all the other Palaces, it also had Mardana Chambers and Zenana Chambers. Mardana Chambers are located after r the Diwan –i –aam, Khas Mahal being one of them. It was the Emperor’s Chamber and Muthamman Burj–an octagonal tower, was attached with it, for King to appear before his people standing on the river-side.

Mumtaz Mahal and Rang Mahal were two of Zenana Chambers. These resided the Emperor’s Wives and mistresses. Rang Mahal was painted with colours and goes by its name –the Palace of Colours. Also, it has a marble pool which is connected with Nahr –i –Bihisht. In the riverbed below the imperial apartments and connected buildings was a space known as zer-jharokha. Other structures in the complex include the royal baths –hammam, step-wells –baoli, Hayat Bakhsh Bagh-Life bestowing Garden, Princes Quarters. Many rulers later built other structures like Moti Masjid by Aurangzeb, Hira Mahal, Zafar Mahal, Mehtab Bagh, etc. Many of these structures were either destroyed or plundered by Nadir Shah and Britishers. There are plans to restore these destroyed structures by ASI. The Lal Qila has a long history of its own and can’t be denied of the honour it receives by being the significance in India’s Independence and India’s History. It truly has stood up to its name of Qila –e –Mubarak. The Fort could be visited throughout the year and even has its metro station –Lal Qila in the Old Delhi region