It was a promise delivered floor by floor. In just 48 hours, an entrepreneur has constructed a 10-floor building in Mohali, a suburban town in Punjab.

Work on the building's construction started around 4:30 pm on Thursday. By Friday evening, the building saw seven floors in place.

As the deadline of 48 hours approached, all the 10 floors of the building were in place even though the glass-panes on the windows and other fittings inside were still being put by the workers and engineers.

The building used pre-fabricated material, including 200 tonnes of steel. 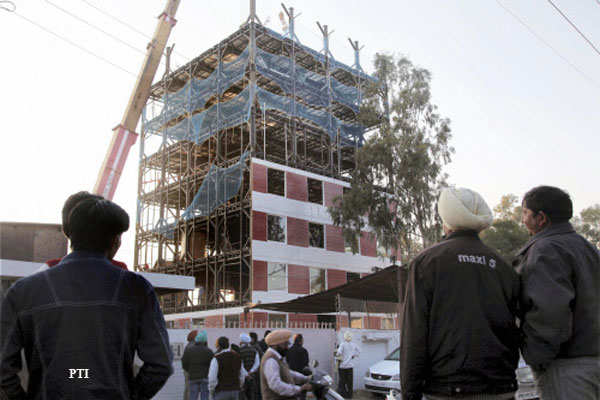 "Our effort was to put the 10-storeyed structure in place within 48 hours. We wanted to prove that this could be done. That feat was achieved well within 48 hours. Just some finishing touches remain. This is only a sample structure," an official of Synergy Thrislington infrastructure company told IANS at the site.

Entrepreneur Harpal Singh, who heads the Rs1,000-crore infrastructure company, had promised that the 10-storey building would be completed within 48 hours.

"This will be the first building of its kind in the country to be built in just 48 hours. The model has been cleared for Zone-V seismic area, the highest risk area (for earthquakes)," Harpal Singh, who owns the JW Marriot Hotel in Chandigarh, had said earlier. 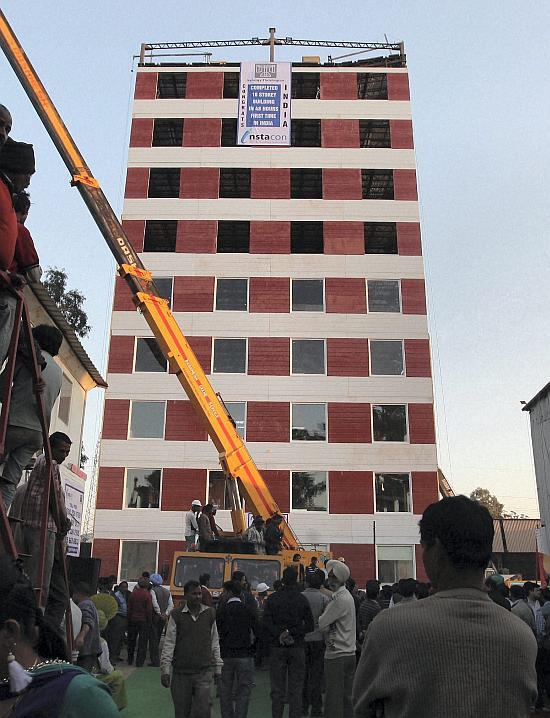 Three floors of the building were constructed in just six hours on Thursday.

Over 200 skilled workers, technicians, engineers and equipment were engaged in the building construction.

The material being used was manufactured in the past two months in a nearby factory.

"No bricks and sand has been used. The outer wall is a double-skinned PUF panel. The cost is almost the same as of conventional construction material. It saves a lot of time that goes into construction otherwise," said officials at the site.

Harpal Singh said that the idea to construct such a building came to him when he was constructing his own house, which took two years to complete - thanks to truant workers.
Mr Singh's company, Synergy, took over Britain-based Thrislington Products, a re-locatable steel partition manufacturer, to set up the new infrastructure company in Mohali.