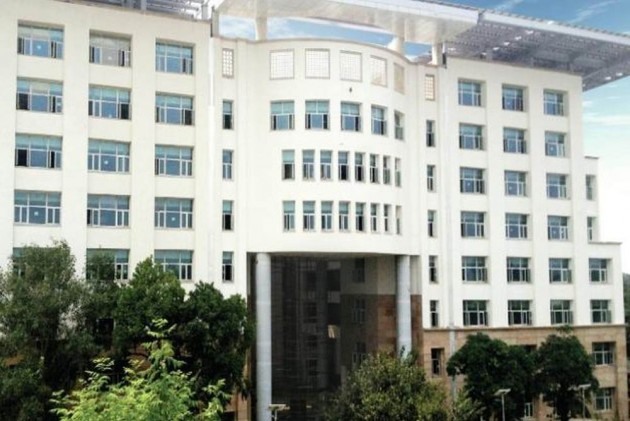 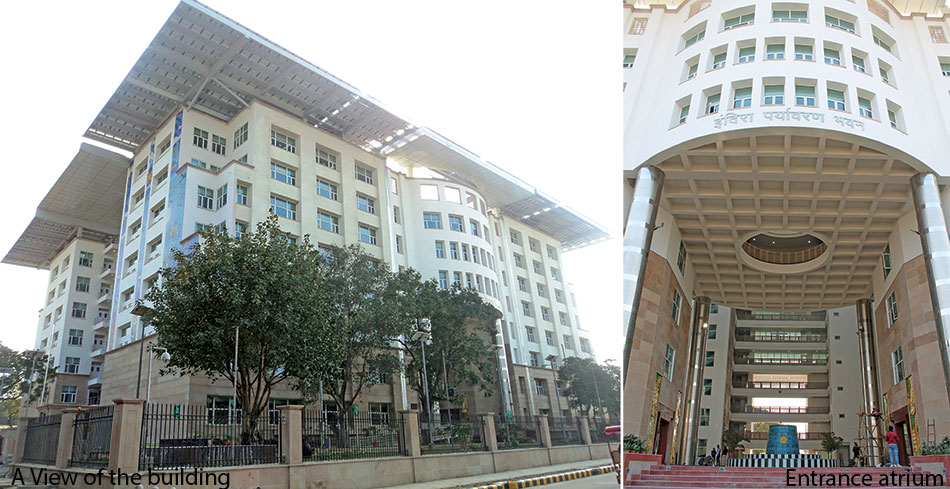 A zero-energy or a net zero building is a building with zero net energy consumption from outside source, which means that the total amount of energy used by the building on an annual basis is almost equal to the amount of renewal energy produced at site. Such a building is self-sufficient in energy requirements and thus highly energy efficient. It contributes very little greenhouse gases, saves energy produced either from non-renewable or renewable sources somewhere else, and most of such buildings get half or more of their energy from the grid and return the same amount during non-peak hours of their use.

Indira Paryavaran Bhawan, the headquarters of the Ministry of Environment, Forests and Climate Change, in Jorbagh, New Delhi, was constructed by the Central Public Works Department (CPWD) as project management agency 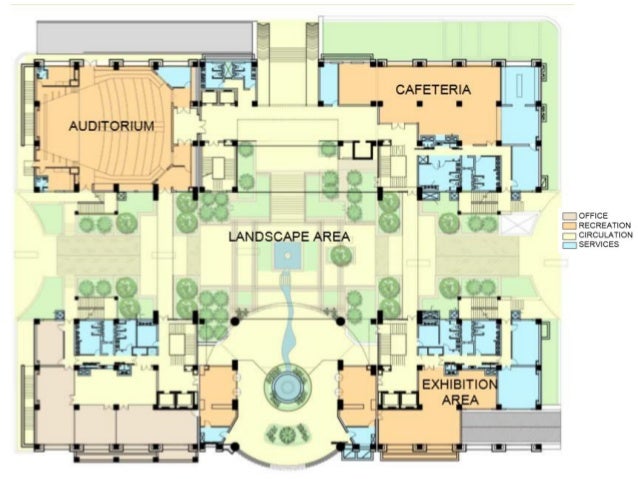 The G+7 storeyed structure with 3 basements, has a plinth area of 32,000 sqm, is centrally air-conditioned with 400 TR capacity (HVAC), has 7 lifts, and all essential services like DG sets, UPS, IBMS, fire detection and fire-fighting systems, CCTVs, access control, automated parking, and other electrical, landscaping and horticulture services.

The building has the advantage of natural ventilation throughout, with a central courtyard between the North and South blocks. These blocks are connected through corridors with stone jaalis and balustrades above the 4th floor level. An entrance atrium of four storeys height has been made in the middle of the North block and in the entrance to the South block. The building has large span trusses at terrace and space frames in the central courtyard to support solar panels. 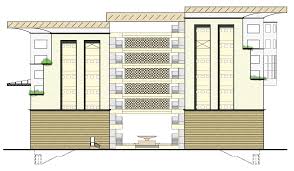 The AC plant room, electric substation, DG sets, fire-fighting pumps, robotic parking for 330 cars and sewage treatment plants are located in the basements. Pedestrian entry has been provided in the front with vehicular access on the sides.

To conform to the design and construction as per Platinum rating under LEED and 5-star rating under GRIHA, the building envelope has been designed to be ECBC compliant and orienting specific devices with envelope insulation to reduce heat intake. Trees have been preserved to the extent possible and local materials used, besides reflective roofing, low heat transmission glass, energy efficient materials and practices. Dholpur stone cladding has been provided over fly ash brick/AAC block walls up to two and half storeys.

The building has been made energy efficient through onsite solar power generation, reduction of conventional lighting load by enabling 75% day light use, generation of energy by deploying thin film transparent PV modules on space frame over the terrace and central courtyard, use of high efficiency lighting fixtures, astronomical/time switches and occupancy sensors. 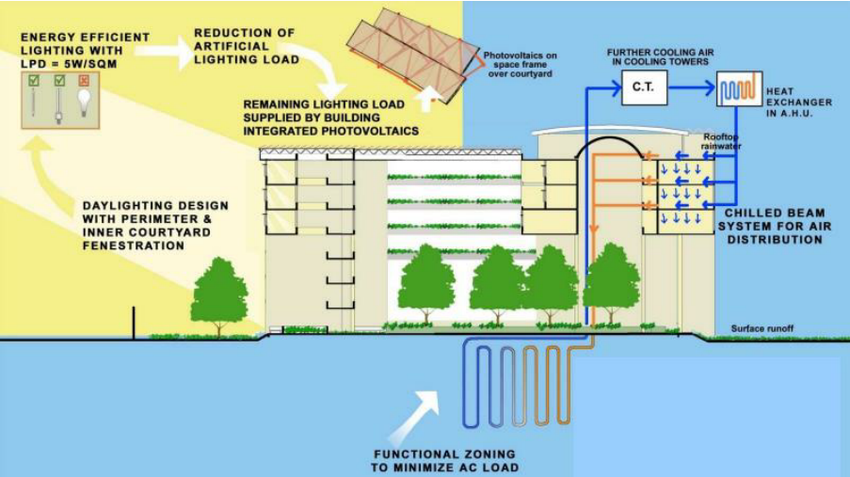 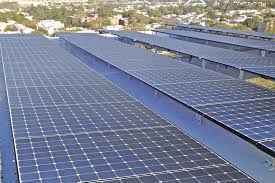 The electrical load of the building was estimated to be 830 kW. The substation was constructed with two dry type transformers each of 1000 kVA, 11 kV/415 V located in first basement. One step up dry type transformer of capacity 1250 KVA was provided for supplying power from solar panels to the New Delhi Municipal Corporation grid to make it a zero net energy building. Emergency power was provided by two 500 kVA, 415 volts, 50 Hz, radiator cooled DG sets. The DG sets were provided through synchronization panel with built in protections for the electrical system. The electrical changeover system was capable of restoring power supply within 15 seconds of disruption (black-out or brown-out) of power.

The building was designed for both air-conditioning and heating. The air conditioning load was estimated to be 400 TR for which two 240 TR water cooled screw chillers having one standby for conventional system and one 200 TR water screw chillers have been installed for chilled beam system. Total load of the system would have been around 800 TR if conventional system had been provided.

Energy-efficient chilled beam system of air conditioning with energy consumption less than 50% compared to conventional system, has been provided, except for the ground floor and 7th floor on the northern side. In these locations, a chilled beam system was not provided due to height of more than 3m and possible high humidity levels in areas like cafeteria, yoga room and gymnasium.

Active type chilled beam system was provided in the building comprising a casing with integral primary air duct fitted with sets of induction nozzles. The coils were used for cooling and heating operations (2-pipe system). The assembly had two separate chilled water coils with single supply and return connections. In the mixing section of the unit, conditioned secondary air was mixed with the primary air and discharged horizontally (Coanda effect) into the room via slots. The unit comprised external casing, edge profiles and suspension lugs.

A short section of insulated flexible duct was used to connect the primary air ducting to chilled beam ensuring that flexible duct connection to the beam was sealed air tight. A balancing damper was installed in primary air duct to facilitate air supply balancing of each beam to the scheduled static pressure at unit level. AHU's serving office areas envisaged with chilled beam system were provided with centrifugal fan, cooling coil and filter section. These air handling units were capable of delivering constant volume of air to the plenum of chilled beams.

Chilled beams were installed in all conditioned office spaces and corridors, receiving chilled water input at 16-17 degree Celsius to avoid any condensation on surface. In addition, dry fresh air was injected into the AHU room, which ultimately got mixed with the (return) air coming out from the conditioned spaces for formation of primary air. Then, the same primary air was injected into the plenum of active chilled beams, which passed through the small nozzles, creating negative pressure for induction. Finally, the induced air passed through the secondary chilled water coil inside the beam. Therefore, sensible cooling effect could be created without any condensation. Primary air conditions were designed in such a way that air can take care of latent load present inside the spaces. 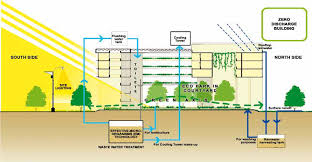 The building was also provided with a heating system. Hot water generators of total installed capacity 240 KW were provided in the AC Plant room.