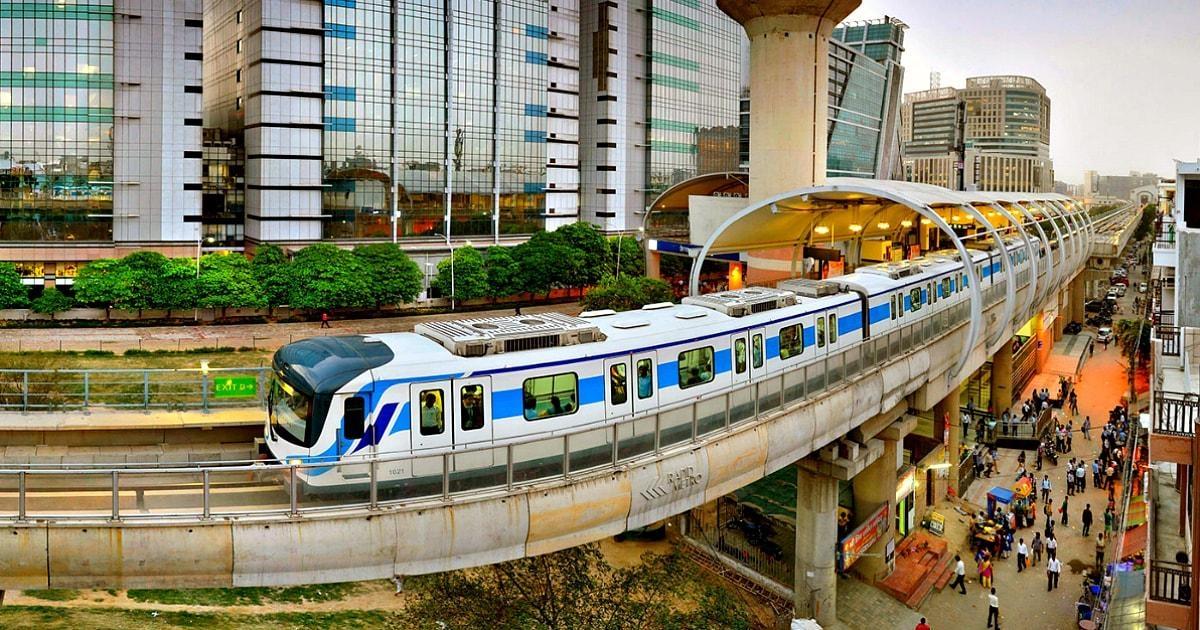 Vision of the Sagarmala Programme is to reduce logistics cost for EXIM and domestic trade with minimal infrastructure investment. This includes: 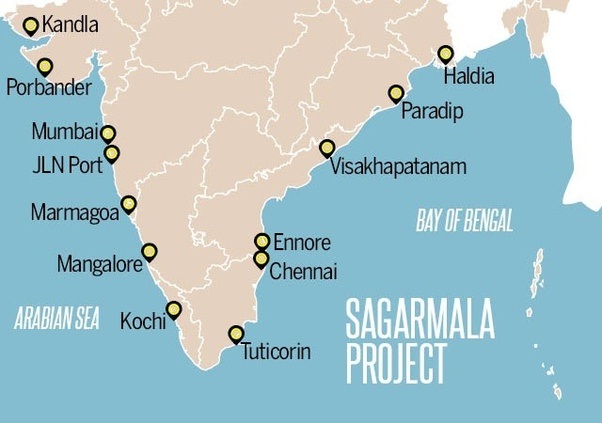 Components of Sagarmala Programme are:

• Port Connectivity Enhancement: Enhancing the connectivity of the ports to the hinterland, optimizing cost and time of cargo movement through multi-modal logistics solutions including domestic waterways (inland water transport and coastal shipping)

The development of any nation depends on the transportation networks and the ways in which they are being maintained. The same holds true for the development of a huge and populous nation like India. For connecting the areas and maintaining smooth flow of traffic, the construction of new and developed roads are a must. The same will be achieved with the implementation of the Bharatmala project. Under the scheme, a host of new roads will be laid down in the nation.

Bharatmala Pariyojana is a new umbrella program for the highways sector that focuses on optimizing efficiency of freight and passenger movement across the country by bridging critical infrastructure gaps through effective interventions like development of Economic Corridors, Inter Corridors and Feeder Routes, National Corridor Efficiency Improvement, Border and International connectivity roads, Coastal and Port connectivity roads and Green-field expressways. 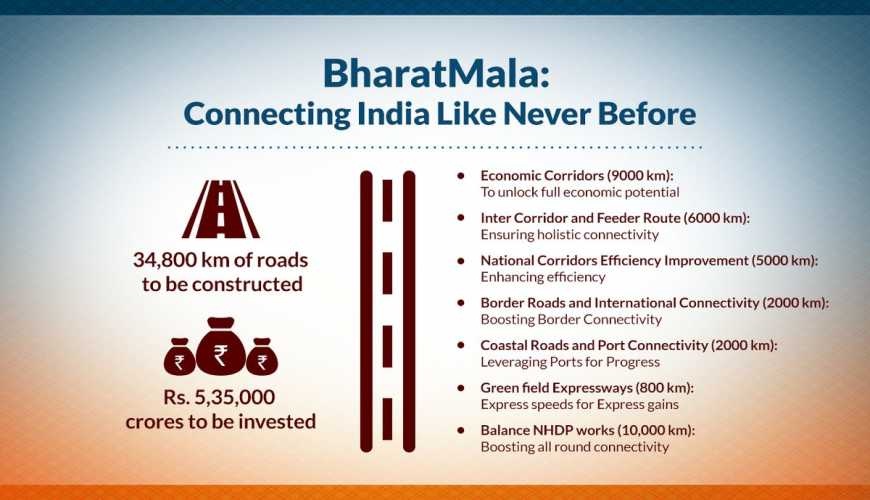 The announcement of the mammoth scheme was done by Shri Nitin Gadkari, in the presence of the Prime Minister Shri Narendra Modi. The implementation of a pan-nation scheme to improve the road network was the idea of the PM. All key aspects of the scheme will be managed by the Road Transport and Highways Ministry of the country.

The proposed Mumbai Trans Harbour Link (‘MTHL') has been planned to facilitate decongestion of the island city by improving connectivity between Island city and main land (Navi Mumbai) and development of Navi Mumbai Region. The link was envisaged about 35 years back.

Earlier three attempts in the year 2006, 2007 and 2013 by the Government authorities to take up the Project in various modes including PPP and EPC did not succeed.
Govt. of Maharashtra, vide G.R. dated 4th February 2009, decided that the project will be owned and implemented by Mumbai Metropolitan Region Development Authority (MMRDA). Govt. of Maharashtra, vide G.R. dated 8th June 2011, designated the project as Regional Development project. 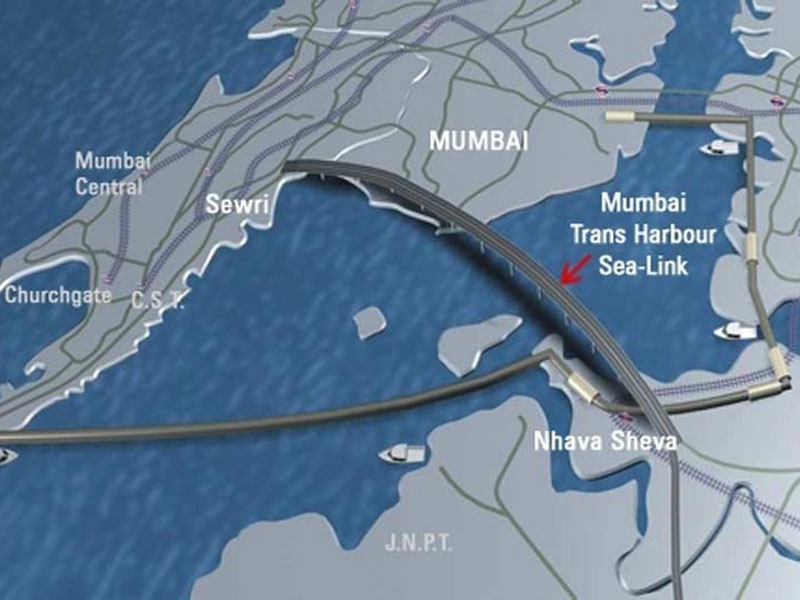 Accordingly, the Mumbai Metropolitan Region Development Authority (MMRDA) has undertaken the implementation of the Mumbai Trans Harbour Link Project, connecting Sewri on Mumbai side to Chirle on Navi Mumbai side. This important link having length of about 21.8 Km is being implemented considering the importance of connectivity between the island city and the mainland. On completion of this project, the commuters traveling from Mumbai towards Navi Mumbai, Navi Mumbai International Airport, Jawaharlal Nehru Port, Panvel, Alibaug, Pune and Goa will not only be saving travel time but will also save in terms of fuel. This will also help alleviate the traffic congestion in the island city and facilitate development of Navi Mumbai area.

Railway’s goal of providing connectivity to all state capitals of the northeastern region, a survey was conducted in 1997 for a new line from Harmuti to Itanagar and the project was sanctioned in 1996-97 Railway Budget as a Metre Gauge line. The approval of the state government was received in 2006, but the alignment had to be changed in 2010 on the request of the state government and finally the line was taken up as a Broad Gauge line from Harmuti to Naharlagun. 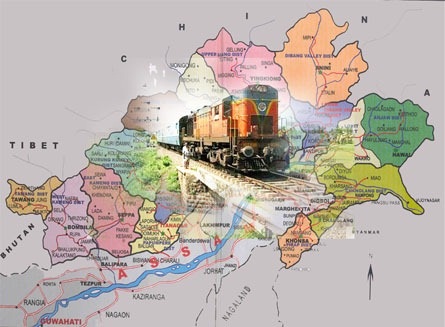 The engine trial run was completed on 15 October 2012, but the railway station was only opened on 7 April 2014. On the same day a Naharlagun-Dekargaon Passenger was inaugurated. Station has 3 platforms. Three trains are running from Naharlagun Station at present. First is Naharlagun - Guwahati Donyi Polo Express on daily basis, second is 22411/Naharlagun - New Delhi AC SF Express and third is Naharlagun−Guwahati Shatabdi Express.

Prime Minister Shri Narendra Modi launched the Setu Bharatam programme for building bridges for safe and seamless travel on National Highways, in New Delhi today. Speaking on the occasion he said that a good infrastructure network is vital for the growth and development of a nation. He said that in order to satisfy the aspirations and long felt needs of people it is necessary to bring in a qualitative change and a comprehensive, integrated approach in developing infrastructure in the country.

Speaking on the occasion Road Transport & Highways and Shipping Minister Shri Nitin Gadkari informed that the Setu Bharatam programme aims to make all National Highways free of railway level crossings by 2019. This is being done to prevent the frequent accidents and loss of lives at level crossings. The Minister informed that 208 Railway Over Bridges (ROB)/Railway Under Bridges (RUB) will be built at the level crossings at a cost of Rs. 20,800 crore as part of the programme. The details of 208 ROBs are as follows: 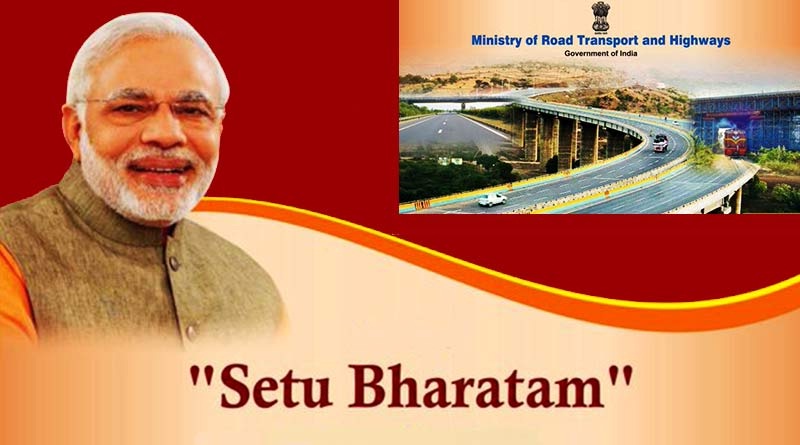 Detailed Project Reports have already been received for 73 ROBs and of these 64 ROBs are likely to be sanctioned with an estimated cost of Rs. 5600 crore by this financial year i.e. 2015-16.

The Rashtriya Rajmarg Zila Sanjoyokta Pariyojna, approved by Prime Minister Narendra Modi at a review meeting last week, entails development of 6,600 km of highways at an estimated cost of about Rs 60,000 crore.

• “Under the Rashtriya Rajmarg Zila Sanjoyokta Pariyojna, roads will be developed to connect100 district headquarters across the country. The 6,600 km of national highways do not have uniform configuration across the length. These would be upgraded to ensure better connectivity,” said a senior official in the Ministry of Road Transport and Highways (MoRTH). 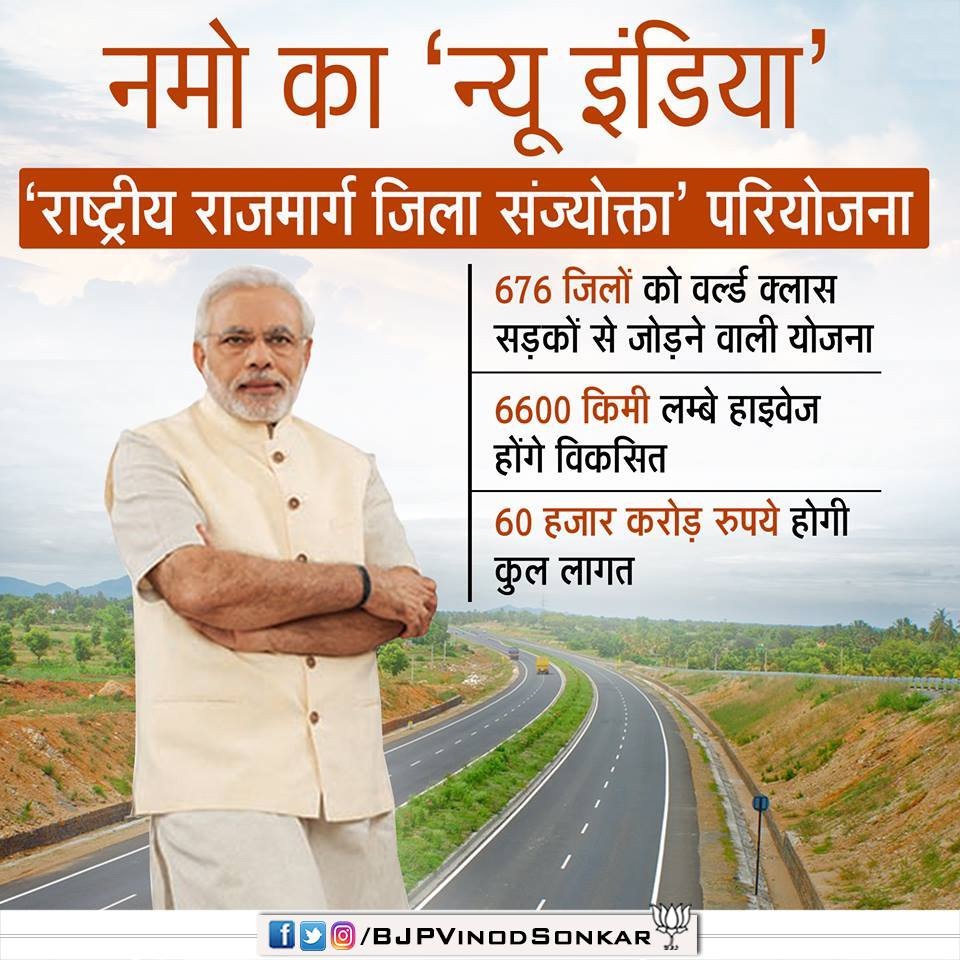 • The government has backed up this mega push for roads development projects with policy initiatives designed to facilitate resource mobilisation. The Cabinet Committee on Economic Affairs (CCEA) on Wednesday approved an exit policy permitting developers to exit highway projects two years after completion of construction to release locked-in equity as potential capital for future projects.

Inland Waterways Authority of India (IWAI), anticipating an increase in cargo traffic, plans to purchase 8-10 inland cargo vessels to operate on two key waterways – the Ganga and the Brahmaputra.

Following the Government’s push to this mode of transportation, it expects there will be a demand for 150-200 barges/vessels on the Ganga (National Waterways 1) in the next 3-4 years. 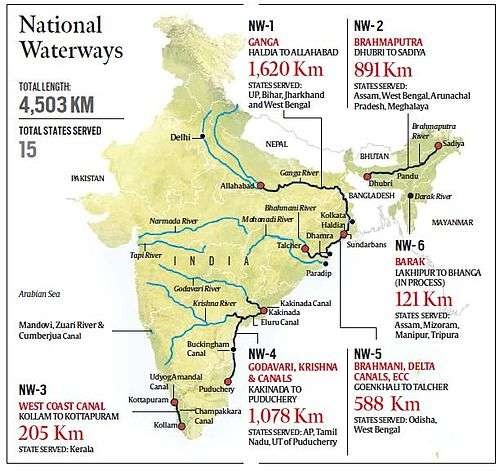 Cargo traffic on the two waterways, called the National Waterway 1 and 2, is expected to double to around 65 million tonne as inland water transport is efficient, economical and environment friendly mode for transportation, according to an IWAI official.

The authority plans to procure vessels suited to the existing fairway developed and maintained by IWAI at National Waterways 1 and 2 initially.

This is to demonstrate its competitiveness vis-à-vis rail and road and to create awareness among shippers, vessel operators and investors on the potential of IWT system. 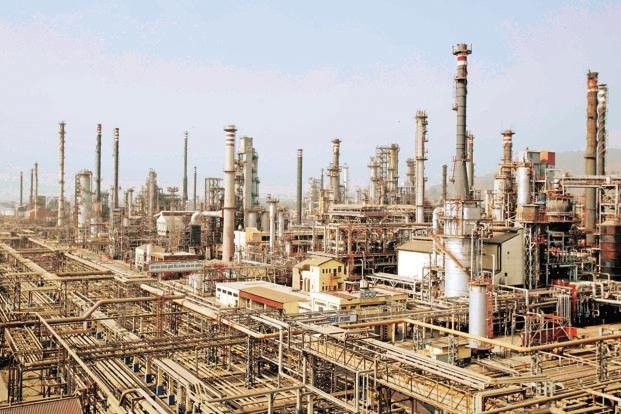 The pipeline will carry 3.75 million tons per annum of LPG, IOC said in an application to the sector regulator PNGRB seeking approval for the pipeline project.

LPG will be fed into the pipeline at Kandla port as well as IOC's Koyali refinery in Gujarat.

This will be the biggest LPG pipeline in the country.

GAIL currently operates a 1,415-km line from Jamnagar in Gujarat to Loni near here. The line carries 2.5 million tons of LPG annually.

GAIL also has a 623-km Vizag-Secunderabad pipeline. IOC also has a 274-km pipeline from Panipat in Haryana to Jalandhar.

Char Dham Expressway National Highway (Hindi: चार धाम महामार्ग), is a proposed two-lane (in each direction) express National Highway with a minimum width of 10 metres in the state of Uttarakhand. The proposed highway will compliment the under development Char Dham Railway by connecting the four holy places in Uttarakhand states includes Badrinath, Kedarnath, Gangotri and Yamunotri The project includes 900 km national highways will connect whole of Uttarakhand state.

The total cost of INR Rs.12000 crores and the foundation stone of the project was laid by Prime Minister of India Narendra Modi on 27 December 2016 at Parade Ground in Dehradun. The highway will be called Char Dham Mahamarg (Char Dham Highway) and the highway construction project will be called as Char Dham Mahamarg Vikas Pariyojana (Char Dham Highway Development Project) and is made to improve the connectivity to the Chota Char Dham centered in the Himalayas. 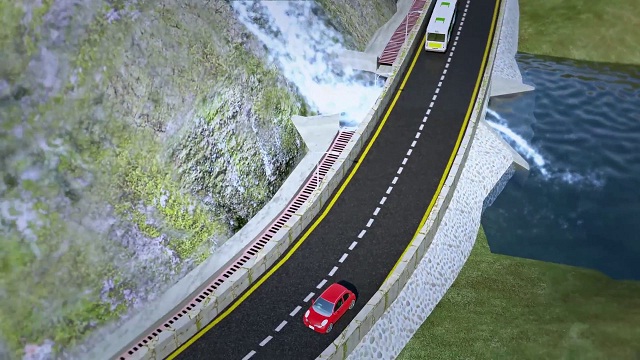 Road will include several long bridges and tunnels to eliminate accident and slide prone areas. Indian Railway and National Highways Authority of India have been directed, by the Chief Secretary of India, to ensure that rail and road highway routes are integrated on this circuit

The project will have bypasses, bridges, viaducts, pit stops, parking, helipads and helicopter emergency response services, etc along the way.

10. Highest Bridge of the World on River Chenab

The Chenab Bridge is a railway steel and concrete arch bridge under construction between Bakkal and Kauri in the Reasi district of Jammu and Kashmir in India. When finished, the bridge will span the Chenab River at a height of 359 m (1,178 ft) above the river, making it the world's highest rail bridge.In November 2017 the base supports were declared completed allowing for the start of the construction of the main arch . The bridge is scheduled to open in 20 19 though that seems highly optimisitic. 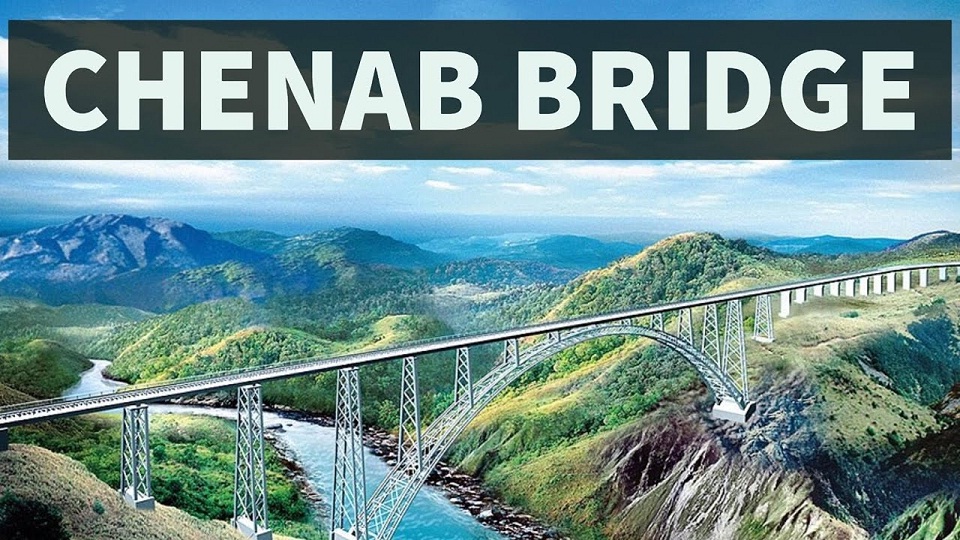 Key technical data of the bridge include:

This makes the Chenab Bridge: